We got our first AKC inspection on April 2, 2014 and passed with flying colors.  But before the inspector arrived at my door, I was anything but relaxed and confident. After the second inspection in 2018, I realized that these inspections are so dread inspiring.

Any time one mentions the word inspection, a certain amount of dread and trepidation creeps into the consciousness.

Any doubts about performance that one might have instantly replaced all self-confidence and you begin to wonder if what you are doing is going to measure up.

I got an email while on vacation. I hate emails on vacation, but it has become a part of life—you never leave the job behind anymore and for someone who did not grow up with all the technology we have today, it is something you never seem to get accustomed to.

I thought I could put the email off until we returned home, but within 48 hours, I received a follow-up message. This AKC inspection stuff was serious so I had better reply.

Why me? Had there been a report made to AKC concerning one of my puppies? Had I done something wrong? Perhaps I had too many litters in one year. The AKC website currently states, "Any AKC customer (breeder, retail pet shop, or broker) that breeds 7 or more litters per year or conducts 25 or more registration transactions per year is automatically added to the list for inspections." American Kennel Club.

My real fear was that I had done something to annoy my neighbors such as dogs barking and they wanted retaliation. None of that turned out to be true, oh and my the way, we have wonderful neighbors.

Luckily, I was not being inspected due to any adverse reports. My inspector informed me that I would not be notified by email if that were the case. I would just get an unannounced knock at my door if they suspected problems.

What sort of complaints, I wondered? They could come from a variety of sources including disgruntled customers or angry neighbors. Even resentful competitors and co-owners have been known to complain to the AKC.

Rather, I was being inspected because I had reached their threshold of litters, but then this was a random event—rather like putting your name in the lottery and I was picked.

As it turns out, all my anxiety about my AKC inspection was for naught. My inspector was courteous, helpful, and very friendly. He arrived when he said he would and placed coverings on his shoes to prevent any spread of infection. Breeders are always worried about the spread of germs. 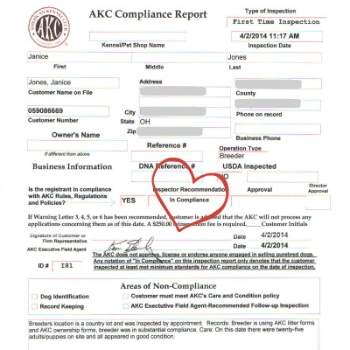 My inspector was thorough so it would have been difficult to hide something. He wanted to see everything, but he was particularly interested in my paperwork.

The AKC is extremely concerned about breeders maintaining accurate records and provides forms and an online system of record keeping for those who hate paperwork. This is important because the AKC wants to assure that when a breeder registers a litter of puppies from a particular dame and sire, they can be assured that the puppies are truly the offspring of these dogs. There are apparently an alarming number of cases of questionable parentage presented each year.

No one likes paperwork, but many breeders do not use the methods AKC recommends for keeping track of breeding, whelping, and litters. Post it notes on a bulletin board, Scraps of paper thrown in a desk drawer, or scratches in a calendar are imperfect substitutes for accurate record keeping.

With his trusty laptop and briefcase, he began asking specifics about each dog. All the information he asked me was already in his laptop database, but he wanted to be sure my records corresponded with his. They did.

They also check the facility and the dogs to see if the breeder is caring for the dogs, in a way, that meets the minimum standard of cleanliness and well-being for the housed dogs. AKC is not an enforcement agency for animal cruelty or neglect, but can contact local authorities if they suspect abuse or neglect.

Permanent identification on the dogs is also necessary such as tattoos or microchips. My dogs are all microchipped and registered with AKC Reunite, so again, I was in compliance.

He looked at the two litters I had:

One was a hybrid Maltese – Shih Tzu. Those puppies were not of interest to him.

The second was an AKC Shih Tzu litter. This litter consisted of four little black Shih Tzu belonging to the White and Gold Mama. He asked to see the father. I rather expected him to DNA the Dad, but since I only had one black male, it was rather obvious who the father was.

During an AKC Inspection, They check...

Disaster Plan? What is that? Oops, I guess I forgot that small detail. I was informed that this is no small matter. Planning for emergencies should be a top priority whether you have 1 dog or 100.

I knew what I would do in the case of an emergency, or so I thought. It was all up in my head and my husband had a vague idea what I might do if we had a crisis. That was not good enough.

Suppose it was I who was the emergency, my AKC inspector asked. “What if you had a heart attack and there was no one home to care for the dogs? Animal control could confiscate them.

What a terrible thought.

All my beloved pets in an animal shelter!

That thought was too much for me to conceive. Time to write an emergency plan, which I did the next day. This part of the inspection is a newer requirement, so I was not penalized for not having a written posted plan. Next time, though, I was warned, if it is not posted, I would be in trouble!

The entire AKC inspection visit lasted less than 45 minutes; the inspector was off to his next stop and me? Well, I exhaled a long sigh of relief knowing that I had passed my first AKC inspection with no problems.

As it turned out, the first inspection was a bit of an anomaly.  I had either improved or the second inspector has more realistic expectations.  I found out later that the first inspector had little to no experience inspecting people's homes.  He was accustomed to walking through large kennels, for which I have none.  All the dogs live in the home with my family and are treated like any other treasured pet.  The second inspector seemed to understand that you can't keep dogs confined to small cages to keep them clean and well cared for.  I was thankful that the AKC sent out someone who truly cared for the welfare of dogs the second time around.