History of the Shih Tzu Breed

Do you love history?  If you are one of those people who can’t wait to read about what happened in the past, I salute you.  I’m just not there with you.  Sure, I took history classes in high school and college because I HAD to but found little to relate to until I got a little older.  As I got older and older, I realized that I had lived through one or many history lessons, and then it became real to me.

This hit home to me just recently when my daughter told me she had to take a music class as an elective.  Great I thought, maybe now she might enjoy some classical music because that was what I had to study in college.  Wait.  No, she signed up for a class called the History of Rock and Roll.  Now, if you lived through that era, you’d never have guessed that someday, some college students would be studying rock and roll as a history lesson.

The history of dog breeds can be just as dry as some history lecture course, but it doesn’t have to be.  Each dog breed has its own story to tell, and if you are extremely into showing or pedigrees, you might want to invest in a book or two that traces each dog, its owner, and who they mated with, including their wins and losses throughout the written history of the breed.  This article, however is not about a detailed description of such lineage.  Let's instead look at the high points of Shih Tzu history, from Tibet, to China, to England and then to the U.S. 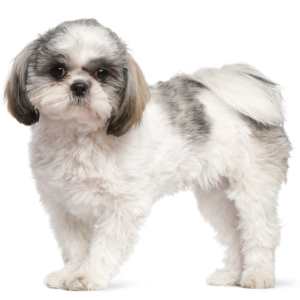 Ancient History of the Shih Tzu

Many believe that the Shih Tzu originated in Tibet and later developed in China a millennium ago.  Others think that Shih Tzu dogs can trace their beginnings as far back as 2000 years.

Dog breeds developed during the 19th -- 20th century have a much cleaner history to tell. There are written records and sometimes photos of the early members of the breed.  The history of ancient breeds such as the Shih Tzu, look more like a patchwork quilt.  Historians can patch together a reasonable timeline through art, sculpture, and the surrounding events in the known history of the era.

Historians and archaeologists now have more information at their fingertips to piece together breed histories, DNA Analysis.  Scientists have examined the DNA of many breeds and determined that today’s Shih Tzu is truly an old breed.  They are placed in the group of ancient breeds that suggests that has a close genetic relationship with wild wolves.

In one study, analyzing the DNA of 85 domestic dog breeds, researchers found a way of separating breeds with ancient origins from the remaining breeds with modern European origins.  There were 14 breeds identified as being the most ancient, the Shih Tzu being one of them.

Others in this category included the Siberian Husky and the Alaskan Malamute.  Now, it is true that Huskies look much more wolf-like than Shih Tzu but in fact their DNA is much more similar than later dogs domesticated in Europe and America.

The Shih Tzu breed, as we know it today, does have a short history, but there is plenty of evidence that dogs similar to today’s Shih Tzu have been around for at least 1000 years and maybe even longer.   The origins of the breed are somewhat obscure, but likely originated in Tibet and associated with the Tibetan lion dogs.   The lion was associated with Indian Buddism, where it originated and what was practiced in Tibet.

Little dogs were bred to resemble little lions and trimmed, leaving only a ruff of hair around their neck, bracelets of fur around their ankles, and small tufts of hair at the tip of their tail. But lions were not native to Tibet or China, so ancient artisans had to use some imagination.  They had never seen a real lion.  Ancient Chinese artists likely created statues of lions based on the descriptions they received.  The little dogs were then created based on the sculptures.

Of all the Tibetan holy dogs, the Shih Tzu was the smallest but still resembled other Tibetan breeds such as the Lhasa Apso, Tibetan Terrier, and Tibetan Spaniel.

Some historians maintain that the Shih Tzu was more characteristic of shorter faced breeds such as the Pug, Pekingese, and Japanese Chin.  The Tibetan breeds have longer noses making them more adaptable to the harsh conditions and high elevations of Tibet.

It is likely that the Shih Tzu developed as a result of breeding Lhasa Apso and Pekinese resulting in a dog whose has continues to grow long and with a snout that is shorter than the Lhasa, but more defined than the Pekinese.  Their size is also a happy medium.  The standard size of the Lhasa is 12-18 pounds and standing about 10 inches high.  The Pekinese is shorter and weighs up to 14 pounds.  While similar in size, the Shih Tzu standard in the US is 9-16 pounds, and stand about 8 to 11 inches.

Today many decorate their homes with these Foo Dog sculptures (see ad above) as a way to bring luck.  It is likely that these are similar to the ancient sculptures made in China from descriptions of what lions could look like.  Small dogs such as the Shih Tzu were fashioned after these Foo Dogs.

In all likelihood, Shih Tzu dogs were most likely the result of crossing the Tibetan breeds with the Ancient Chinese breeds.  But, just how did the Shih Tzu get from Tibet to China?

Historians know little about ancient Tibetan history because of its remote location and inaccessibility to the rest of the world.  Natural barriers such as the Himalayas and other mountain ranges kept Tibet free of outside influences.  This seclusion kept Tibet isolated where it could evolve and develop religion, science, and culture.  Tibetan Lamas always wandered in search of the “truth.”  Out of fear and respect for their neighbors, the Chinese emperors, the Lamas would present tribute gifts as a way to avoid trouble.  Temple dogs made great tribute gifts.  These were called holy dogs or lion dogs.  These little dogs became very popular in the Imperial Palace, and due to their short stature, they were called “under the table dogs.”  They were also referred to as “sleeve dogs” because they fit within the sleeves of robes worn by the elite.

Lion dogs were thought to bring good luck.  Not only were they considered pets of the nobility, but they also guarded Buddist temples.  The notion was that the small temple dogs would sound an alarm with loud barking, which woke the mastiff-type dogs who then went to work guardian the palaces.

Marco Polo and the Ming Dynasty

It was common during the time for small dogs to be exported from different parts of the world and given as gifts to the ruling Chinese emperors.  Owning a toy breed showed others that you had a high social status and became symbols of wealth and position. This was true in China as well as other areas of the old world. Around the time of the Qing (Ch’ing) Dynasty (1644-62) small dogs arrived in China from the Grand Lamas to the Chinese Imperial court.

The Chinese interbred these dogs with their indigenous Pug and Pekingese to create the distinctive “chrysanthemum-faced” dog we today call the Shih Tzu.

Fast Forward to the Current Era

We can credit the Chinese Dowager Empress Cixi (T’zu His), who kept a kennel of Pugs, Pekingese, and Shih Tzu, the ones we recognize today. She supervised the kennel and breeding during her lifetime, but the actual breeding was carried out by palace eunuchs who would cross the breeds to reduce the size, produce unusual markings, and change colors.  Who was this Empress Cixi?  She was the last Empress who came into power in 1861 and stayed in that position until she died in 1908.

At the age of 17, she became the concubine of the Emperor of the Forbidden City.  Was elevated to consort, and then as the mother of the Emperor's firstborn son, she rose to power as a strategist.  Eventually, she ruled over millions of peoples, but she was also fascinated with small dogs.  She maintained a kennel of Pekingese, Lhasa Apso, Shih Tzu, and Mastiff type Tibetan dogs.

After she died in 1908, breeding became haphazard.  Then on October 10, 1911, there was an uprising against the Qing Dynasty in China, followed by the establishment of the Republic of China in 1912. None of these events ushered in good news for the breed.  The eunuchs fled the Forbidden City along with the dogs and sold them to whoever would pay the highest price.

When the Communists overthrew the government in 1949, many of the dogs were destroyed.  Some members of the royalty slit the throats of their dogs before taking their own lives.  They did not want their dogs to fall into the hands of the Communists.  Once the political upheaval and the burning of the Imperial Palace settled, members of the British embassy staff found a few Shih Tzu dogs still alive.  Sir Douglas and Lady Brownrigg imported the first Shih Tzu dogs to England in 1930.  From there a few more dogs were exported from China to Ireland, Scandinavia, and within a few years, English Shih Tzu were being shipped to the U.S., Canada, and Australia.

Many early American breeders had seen the Shih Tzu in England while serving in the Armed Forces during World War II.  After the war, they brought dogs home, bred them, and sold the puppies to other military families. Shih Tzu were also imported from other European countries such as France, Denmark, and Sweden.   The breed’s popularity grew and was recognized as a separate breed by the  American Kennel Club in 1955.

Several Shih Tzu clubs eventually merged into one national organization, the American Shih Tzu Club in 1963.  In 1969, the American Kennel Club recognized the breed and assigned it to the Toy Group.

So even though the Shih Tzu may be an ancient breed, it was not known to the world until 1930.

All of Today's Shih Tzu Dogs

Today’s Shih Tzu dogs come from a gene pool of seven female and seven male Shih Tzu and a Pekingese that was crossed in England in 1952.

The foundation stock included three imports from China to Lady Brownrigg in England, eight more imports to England, introduced into Norway from China in 1932.

One Pekingese was also included even though it caused much concern because it was introduced into the breed by a newcomer and not reported until after the fact.

And, as they say, the rest is history (of the Shih Tzu).

The breed gained popularity as the years went on, reaching number 9 in 2003 with AKC.  By 2013, the breed's popularity has dropped to number 15, still very popular considering there were 177 recognized AKC breeds that year.

Looking for more information on the Shih Tzu?

Here are a few of the books I own and can recommend.  They are great for the first time Shih Tzu owner to those with lots of experience,