Puppy Development and Growth is fascinating to watch, but don't blink, because you might miss something.

Puppies develop so quickly that it's hard to imagine a blind, deaf, helpless puppy progressing to a playful energetic happy member of the family in only seven or eight weeks.  But that is exactly what they do.

Part One:  Includes the Neonate through Week Five

Then I skip to the Shih Tzu Adolescence Stage

If you want to read about Milestones only, grab this article.

If you want to know what goes on before you pick up your cute little bundle of fur, read on... 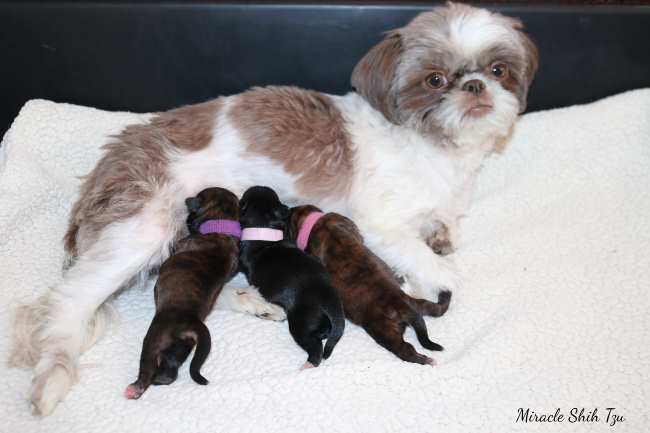 At birth, your puppy’s eyes and ears are closed.  In fact, only 3 senses are working—touch, taste, and smell and even then they are not fully developed.

They can feel and respond to pain, discomfort and minor disturbances by whining or crying. Their body temperature is well below that of a mature dog, and they are unable to tolerate a cool environment. 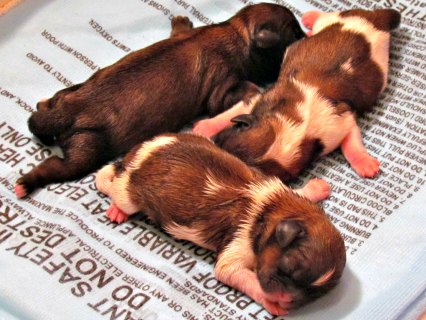 For optimal puppy development, the room temperature must be keep very warm and breeders accomplish this by maintaining room temperatures around 80 degrees and providing heating lamps and/or heating pads.

Puppies of this age are also incapable of either urinating or defecating on their own and depend on their mother to stimulate this process.

Their first main mission in life is to find warmth and food.  They have no teeth, but their nails are fully developed and some may even need trimming in the first week of life.

Their main activity at this time is to search out nourishment from their mom and sleep.  Newborn puppies sleep most of the time, often twitching in their sleep and move only to reposition their body.

Twitching occurs because at this point in their young lives, they sleep is the REM stage, a stage characterized by high brain activity.  Beyond that, they have little interaction with litter mates or the environment other than to huddle close to litter mates and mom for warmth.

They depend on their mother to provide the food they need and to help them potty.  Mother also has the assigned task to clean up after all pottying activity, a job that mother dogs accept happily.

Puppy Development Summary of First 2 Weeks:  Jobs for the Puppy, Mama and Breeder

Assuming all is fine, there is not much happening during the first two weeks of life.  The majority of work falls to the Mama as she spends most of her time sleeping, nursing and cleaning her babies. 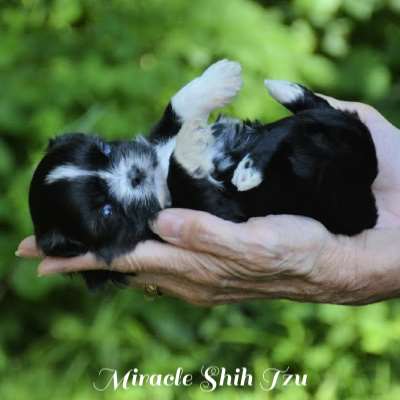 At around two weeks of age, the puppy’s eyes open and then several days thereafter, their ears open.  At first their vision is blurry but soon vision improves and the puppies can now see the world at least from their vantage point.

Even into adulthood dogs do not have particularly sharp vision.  Once their ears open they may begin to startle when they hear sounds.  Even from the very beginning, their range of hearing is nearly twice that of humans and into the ultrasonic range.

We give the puppies their first worming medications at two weeks of age and then repeat at 4, 6 and 8 weeks.  We worm for all types of intestinal parasites such as roundworms, hookworms, and whipworms as well as coccidia and giardia.

Notice the blue tint to the eyes.  That will gradually change to a dark brown within a couple of weeks.  Any pink that is still showing on their noses, will also change to black, blue or liver. 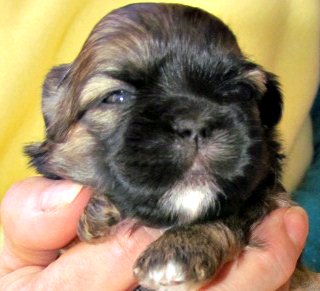 Between 2 and 3 weeks of age is often called the Transitional phase where a puppy's brain becomes more mature.

At three weeks of age, puppies become somewhat adventuresome and begin to move around more, though they are not very sure footed at this age.  This might be equivalent to the crawling stage in the human infant.

But progress occurs rapidly and by 3 ½ weeks most puppies are getting around well on their own four paws.  Most puppies have figured out how to crawl out of the whelping box and adventure further each day.  Their eyesight and hearing are improving daily.

This is also the time that they begin to lap liquids and mouth solid foods if the consistency is mush-like. They also begin to have limited interaction with litter mates, but the majority of this interaction revolves around who is going to serve as pillow and who is going to serve as blanket as they pile up in one small corner of the whelping box.

Puppies take turns sleeping on top of the pile and cuddling underneath and don’t seem to mind either position. 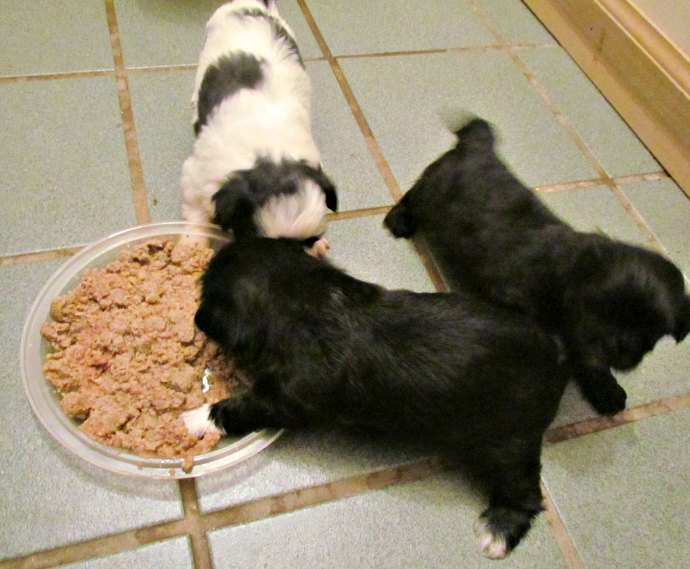 Three weeks is the ideal time for socialization to begin.  Puppies have their eyes and ears open and are beginning to crawl around more and try standing and walking. We do not wait until 3 weeks to start socializing.

The puppies are handled daily and placed in a variety of different positions including upside down.  We also manipulate their little legs and touch their paws. This helps get them ready for grooming later on. We also start exposing the puppies to different surfaces such as carpet, tile and wood.

Most puppies need to have their nails clipped at this age and experience a soft brushing for the first time. 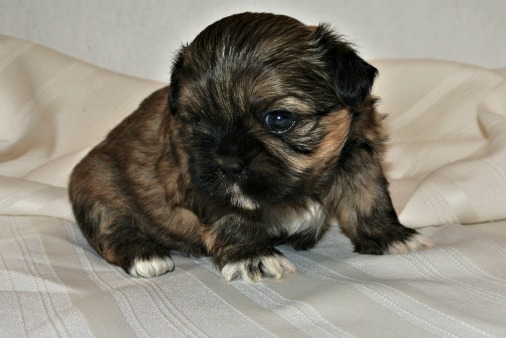 Pat Hastings, in Another Piece of the Puzzle: Puppy Development, identifies the period between 3 and 4 weeks as an Awareness or Identification Period. This period is marked by a good sense of hearing and vision, better coordination, and an awareness of self develops.  Many puppies find their "voice" during this period and little barks and growls can be heard.

By four weeks of age, most puppies have figured out what “real” food is and continually eat more dog food, nursing less.  They are far from being weaned at this age.  They are moving around more and sleeping less.  This is the time where socialization to the outside world begins.

Puppies should begin listening to music or TV, hear environmental sounds such as the dishwasher, hair dryer, can opener, and vacuum cleaner.  It is also a good time to introduce different textures into their world.

At four weeks he is also beginning to regulate his own temperature and feel the urge to pee and poop on his own.  He won’t always need Mama to stimulate him to go potty, yet most good moms continue to clean up after their pups at least for a while. 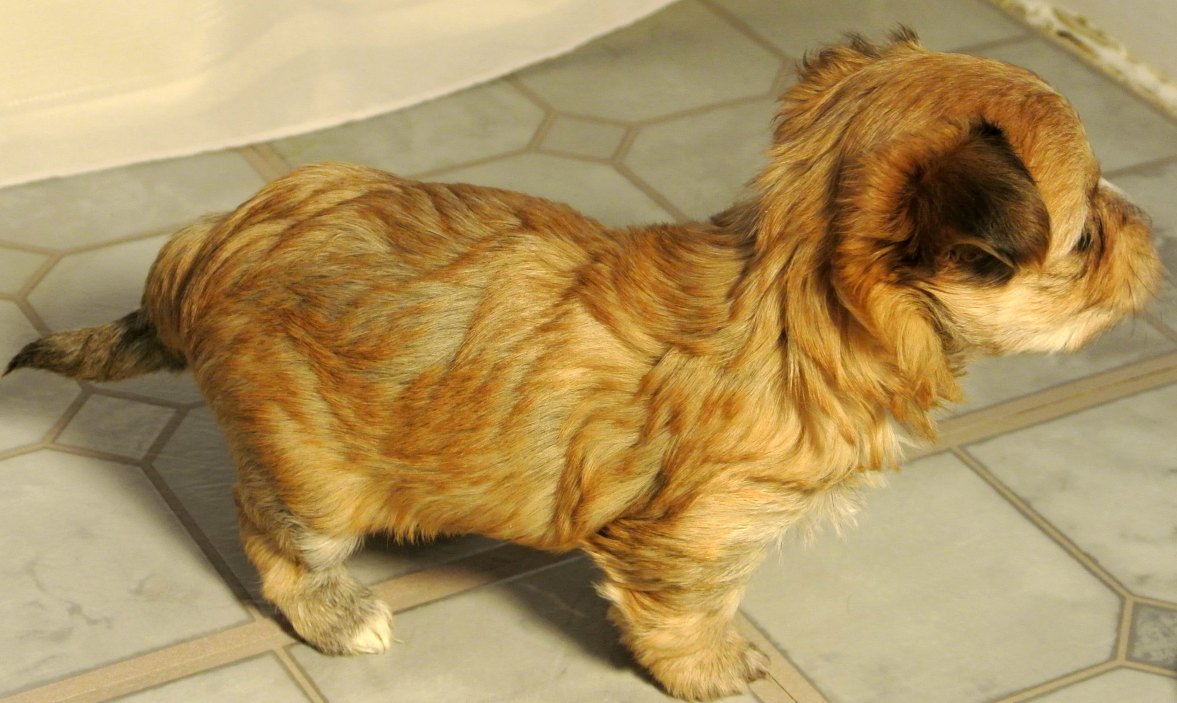 We let each puppy venture on their own away from mom and the litter mates.  Puppies are quite brave and will do all sorts of things as long as their litter mates are right next to them.  When they are forced to be by themselves, it is another story entirely.  You get to see which dogs will be more adventurous and more curious and which ones want to stay close to a human.

We try to give each puppy an opportunity to be alone away from litter mates for short periods of time.  This encourages them to develop their own personality and gain some confidence away from their litter security blanket.

Here is a little video my daughter made a few years ago that shows what a 4 to 5 week puppy can do. 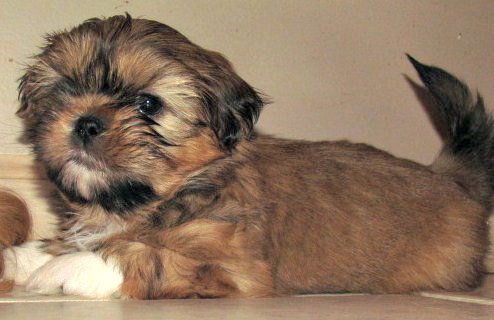 Each Shih Tzu puppy is unique, but on average, you will notice that by about 5 weeks of age, they are able to hold their tail upright.

By six weeks the tail is held closer into the body in the position seen in the adult.

By five weeks of age, he has reached the toddler stage of puppy development and will become very busy interacting with litter mates and of course humans.

If given toys at this age, he will explore but rigorous play is still in this young pup’s future.  Mama will try to encourage her youngsters of this age to wean, making herself less available for free drinks at any time of the day.

Puppies show first signs of “play fighting” with litter mates, but it is too soon to determine temperaments and canine pecking orders at this time.  Some moms actually regurgitate food for their young, although is not seen very much in domestic dogs and I have never seen it in any of our dogs.

This is the period when the Shih Tzu also start holding up their tail more regularly.  Ut to this point, the tails work just fine, wagging happily becuase these dogs are usually happy 24/7.  But the tails do not have the muscle strength to be held over the body until about this age.

You are also going to hear more vocalizations as the puppies play they talk.  Very high pitched barks and play growls can be heard, but this stage is short lived.  Their true voices will be heard in about 3 or 4 weeks.

It's bath time!  This is a good time to begin socializing the puppies for grooming.  They usually get a bath and their nails need trimming.  Their hair is still short and not a problem at this time, but we brush and comb it anyway, just to give the puppies the sensation of grooming.

Read about Puppy Development:  Six to 12 Weeks of Age