Hypoadrenocorticism or Addison’s disease is not a problem typically seen in Shih Tzu dogs, but it can happen in any breed, large or small.

When it does occur, it can seemingly come out of nowhere because the symptoms are vague such as lethargy, weight loss, and weakness, all of which may be attributed to something else.

What is Addison’s Disease in Dogs?

It is caused by a defective immune system which attacks the adrenal glands.  The term, Addison’s disease refers to the 19th-century English physician that first described this condition in people.

The adrenal glands are located in the abdominal area right above the kidneys and responsible for the production of corticosteroids and other hormones that regulate body function.  The adrenal gland has 2 parts—the cortex and the medulla.

Mineralocorticoids, which control the body’s sodium and potassium levels is produced in the cortex.

Also produced in the cortex is the glucocorticoids, those involved in the metabolism of nutrients and reducing inflammation.

Finally, the sex hormones such as estrogen and progesterone are made in the cortex. 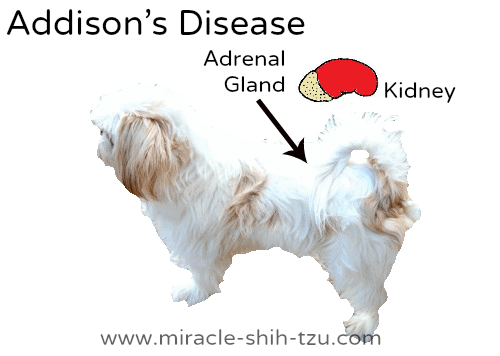 The other part of the adrenal glands, the medulla, plays a role in response to stress or low blood sugar.   It releases epinephrine which increases blood pressure, glucose, and slow digestion.

As you can see the adrenal glands, although tiny, play a major role in maintaining the health of the dog. (And us too).

When these glands are damaged, they can’t produce enough of all these hormones.  Left untreated, Addison’s disease is fate.

It is most common in young to middle-aged dogs and often female dogs are more prone to it than males.

Causes of Addison's Disease in Dogs

Symptoms of Addison's Disease in Dogs

This is a really hard disease to recognize.  Typically, symptoms do not show up until middle age, but by this time the adrenal glands have been under attack for a while and are damaged.

Gastrointestinal symptoms are the most common signs such as loss of appetite, vomiting, and sometimes diarrhea.    Later, the dog becomes depressed, weak and may shiver.

Symptoms may progress rapidly into what is called the acute state or Addisonian crisis of dehydration and collapse.  This is a life-threatening emergency that requires immediate help.

The more common type of condition is chronic and consists of symptoms that come and go.  As time progresses, symptoms occur more frequently as the adrenal glands progressively deteriorate.

The key characteristic of Addison’s Disease is that symptoms seem to appear when the dog is experiencing stress of one sort or another (emotional, physical).  Often the stress of travel, boarding, moving, or another lifestyle change such as the introduction of a new puppy may bring on the symptoms. The physical stress of surgery has also been suggested.

As the adrenal glands continue to deteriorate, the symptoms occur more frequently.

What Happens During an Addisonian Crisis?

Should symptoms come on quickly, treatment will be necessary immediately.  During a crisis, the dog’s electrolytes become imbalanced.

The kidneys can be involved and the blood levels of creatinine and BUN rise.  With the kidneys unable to function, renal failure follows.

Your vet will evaluate the symptoms and run some blood work to assess electrolyte levels.  A low sodium /high potassium level might suggest to the vet to run an ACTH stimulation test.

ACTH test consists of measures the amount of cortisol hormone in the blood.  A dose of ACTH is then given and another blood sample is drawn to see if the adrenal glands are adequately stimulated to produce more cortisol.  If no change occurs, then the vet may suspect Addison’s Disease.

Treatment involves the administration of corticosteroids and intravenous fluids in the case of an acute adrenal insufficiency.

Treating the Chronic form is less intense.  This disease cannot be cured but it can be controlled.

This requires a life-long regimen of mineralocorticoid supplements (fludrocortisone acetate)  which can be given as a daily pill or a monthly injection.  Many dogs also require glucocorticoids such as prednisone.

The problem is that long-term steroid treatments can cause other side effects and also debilitate the dog’s immune system making him susceptible to other health issues.

A visit to the vet about every 3-6 months is necessary to monitor blood hormone levels and change medications as needed.

The other recommendation is to assure that your dog is protected from physical stressors such as too much exercise or emotional stress such as changes in his routine.  Any unexpected stress can set off the symptoms.

The prognosis is good for controlling the symptoms of the course of the dog’s life.  The dog can live a long normal life as long as medication is controlled.

This handbook should be on every dog owner's book shelf. I can begin to tell you how many times, the Dog Owner's Home Veterinary Handbook

has come in handy. I have never read it from cover to cover, but use it as a reference guide. It is well-written and easy to understand.

This is another one of my favorite reference books, especially if you have other pets in addition to your dog. There is a section on most of the commen pets people have including birds, fish, exotics, horses, cats and of course, dogs. I would definitely recommend The Merck/Merial Manual for Pet Health: The complete pet health resource for your dog, cat, horse or other pets - in everyday language. (Merck/Merial Manual for Pet Health (Home Edition))

or the previous handbook for anyone who has a pet.

The information on this and other pages on the Miracle Shih Tzu site are meant for informational purposes only.  For health related issues, always consult your veterinarian.