What to do about Puppy Biting 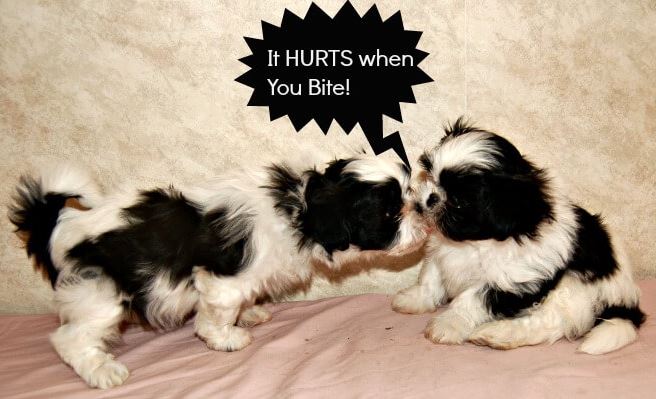 Puppy Biting Hurts.  There's no getting around that.  Those tiny sharp teeth can make anyone jump and yelp--children, dogs, even tough adults.  But this type of nipping is not to be confused with aggression in adult dogs.

Nipping is a normal behavior in young puppies as they use their mouth and teeth to explore their environment.

It goes along with chewing in so much as puppies are teething and anything, especially human skin feels very good to sore gums.

This is not to suggest that we should allow ourselves to be human teething rings.

Why Do Puppies Bite?

There is varying degrees of biting seen in puppies. Puppies bite because they are teething.

Puppies bite because they use their mouths to explore their environment.

Some of the very first lessons that puppies learn from their canine mothers is bite inhibition.

Litter mates become best friends but they can also be seen as aspiring sparring mates.

Some puppy play can get so loud with yelps, growls, and howls that a human observe might think the puppies are trying to kill one another.  Rather, this rough and tumble play has a purpose.

Puppies are learning how to use their mouths appropriately; play without hurting their litter mates.  If they don’t learn from a sibling, mama is likely to jump in, teaching her pups that biting hurts!

If she is effective, she will nip the nipping in the butt.  Many of these lessons begin after the puppy is 6 weeks old when many of the baby or deciduous teeth have erupted, and continues until the puppy goes to his forever home.

A dog’s permanent teeth begin to come in approximately 16 weeks and by the time the puppy is 6 to 7 months, he should be finished teething.

Those puppies that remain with an attentive mother and siblings learn these lessons well before being introduced to their new human family.  Those that leave the nest early may not master these skills.

This is especially true of puppies purchased from a pet store.  These puppies often leave their mother long before 8 weeks of age in order to arrive at the store by 8 weeks of age.  They miss out on this important canine mama training.

What to Do About Puppy Biting?

What if your puppy is mouthing, nipping or biting?  The good news is that much of this behavior will lessen as the puppy matures, loses his deciduous teeth and gains his full set of adult teeth.  Even though this behavior is likely to lessen on its own, it’s best not to encourage or even tolerate it.

If your Puppy bites...

If you have a puppy who likes to use his mouth on you, its best to stop the behavior immediately.  If you have children, you will want to teach them how to avoid getting nipped by the new puppy.

When the puppy nips, squeal loudly in a high pitched voice, mimicking the sound another puppy might make when hurt, remove your hand, and look away or physically turn your body away from the puppy.

In essence you are acting the same way another puppy would if bitten:  cry and leave.  Some puppies need numerous human reminders before they “get it” but most immediately understand that they may have bit too hard.  Losing his favorite playmate, namely you, is punishment that he is not likely to forget.

After a few seconds, go back to playing with the pup.  Use a toy instead of your hands to engage him in play. Puppies should be given at least 2 or 3 changes to correct the behavior.  After that,  if he bites again, get up and walk away.  Playtime has ended.  Begin again later.

Ways to help your puppy avoid biting and nipping

Do not wave your fingers or hands in front of the puppy or wrestle in a way that encourages him to grab on to your hands.  Teach children to pet gently but never use their hands in any way that the puppy would misunderstand them to be chew toys.

Have lots of toys and chews available for puppy to use.  When playing with the puppy, play with a toy, not your hands.

Be sure puppy gets lots of exercise.  If nipping is a problem at certain times of the day or during certain activities, use those times to provide the puppy with additional exercise such as taking a walk or playing fetch.  Some dogs love to play tug.  Keep several tug toys handy, especially for any puppy that likes to play tug with your pant legs.

Never get into the habit of tapping, smacking or holding a dog’s muzzle closed.  They may either think you are playing or may get scared or angry.  The dog should always associate human hands around his muzzle as soothing and calm, not exciting and playful.

These Puppy Biting ideas should work with most puppies, but if you have an adult who is still biting, more intense intervention should be initiated.  The same methods used for puppies work for adult dogs.  Plenty of exercise, restricted hands around muzzle, and plenty of chew toys.

When adult dogs continue to nip, especially during play, it is more than likely an attention seeking behavior.  Turn your back to your dog if he does bite and immediately cease playing.  Puppies get a second chance, adult dogs do not.  Do not go back to playing until he has calmed down.  If this does not work, additional help might be needed.