Shih Tzu Breeding Cycle:  What You Need to Know Before Breeding Your Dog

Orchestrating a Successful Mating means knowing about the dog breeding cycle.  Call it what ever you wish--reproductive cycle, breeding cycle, heat cycle, season, or estrus, domestic dogs all go through a predictable cycle that can culminate in a successful mating if the timing is right.  But as a new breeder, you may be wondering what all of this means?

What New Breeders Need to Know about the Dog Breeding Cycle

Puberty is often defined in small breed dogs as the point when the first estrus or heat cycle occurs and can happen as young as six months old but in most breeds will occur around 8 to 10 months.  It is often later in larger breeds.  This is the point in which the puppy has obtained adulthood and can breed and produce a litter of puppies.  Whether timing a mating at this age is advisable is a matter of debate.  But puppies as young as 6 months old are fertile.

In small breed dogs such as the Shih Tzu, most experts will agree that allowing a mating with a dog this young is not advisable, it does happen.  If you are new to breeding, the best advice I can give is to wait until at least until the second or third heat cycle.  Just because a puppy is fertile and capable of producing a litter does not mean she will be a good mother to her puppies.

Dogs DO NOT go through menopause the way humans do. They become less fertile as they age, but it possible for your older dog to get pregnant. 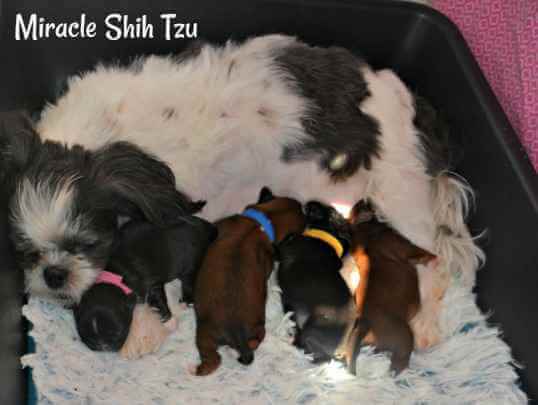 The The Shih Tzu Breeding Cycle

Unlike people, the dog's estrus cycle lasts roughly six to seven months, though some primitive breeds such as the Basenji last upwards of one year.  The heat or estrus cycle in female dogs is made up of four stages, proestrus, estrus, diestrus and anestrus.  The combination of proestrus and estrus is what breeders normally refer to as the heat cycle.

These stages are determined by the physical and behavioral changes that occur in the girls that are brought on by hormonal changes occurring within.

We will discuss these four distinct parts of the cycle individually. But first, most people think of a dog's season or heat cycle to last about 3 weeks (proestrus and estrus or "standing heat").  Sometimes longer and sometimes shorter, the season can vary from breed to breed and even within a breed, from one girl to another, but for the purposes of this article, we will consider the "heat cycle" to  last about 3 weeks.

Most people who are interested in the dog breeding cycle are more concerned about the outward signs that the female dog shows during the heat cycle. To understand how these changes occur, one must look at the how the different hormone levels rise and fall to make these changes possible.

There are three different hormones in dogs and all other mammals, that affect these changes:  Estrogen, Progesterone, and Luteinizing Hormone (LH).

Estrogen is the hormone responsible for stimulating the ovaries to produce eggs and for preparing the reproductive organs for breeding.  It causes the vagina to thicken and is responsible for the bloody discharge of proestrus. Estrogen rise and peaks about one to two days before Estrus, then drops

Luteinizing Hormone or LH triggers the ovaries to release the eggs. Ovulation occurs 48 hours after the LH surge and is considered Day 2.  Once ovulation occurs, the egg must go through a maturation phase before fertilization can occur which is often day four to six following the LH surge. LH also ensures that follicles convert to corpora luteal cysts that begin to produce progesterone.

Progesterone is the hormone that maintains a pregnancy,

Prolactin is secreted from the pituitary gland  and found at elevated levels in serum during maintenance of the corpus luteum, and during early lactation.  It is the main hormone for production of milk and helps the mother remain pregnant.

Relaxin is a hormone that is produced by the placenta after the embryos have implanted into the uterine wall. It can be detected in the blood as early as 22 to 27 days after breeding.  The levels of this hormone remain high throughout pregnancy and then decline at the end of pregnancy.

The significance of this hormone is that one can measure the levels in a blood sample to determine if the female is indeed pregnant.  The great thing about this test is that it can rule out a false pregnancy or pseudopregnancy.

Sometimes a female dog will look and behave as though she is pregnant when if fact she is note.  These signs can appear for up to two months after her heat cycle. A relaxin test can tell the difference because during a false pregnancy, the placentas do not form. 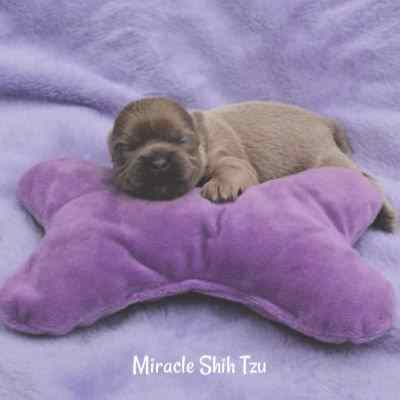 More Vocabulary to Help You Understand the Dog Breeding Cycle

Ovulation:  The release of the egg from the ovaries;  eggs need 48 hours of maturation before they can be fertilized.  Ovulation occurs at approximately 5 ng/ml

Sperm:  Can survive for approximately 5 to 7 days

Progesterone low at beginning of this phase (< 1.0 ng/ml)

If pregnant, prolactin levels begin to increase and peak near the end of pregnancy and diestrus.

The hormone relaxin begins to increase around day 20 of pregnancy and diestrus, peaking around day 40.

Lasts About 9 days but can be anywhere from 0 to 27 days.

The Proestrus phase is characterized with a bloody discharge that lasts about a week.  You may notice small drops of light colored blood, her vulva will swell and she will have some changes in behavior.

This stage of dog heat can last from 4-20 days. The average is 7-10 days. There are 3 common signs for a dog in heat during this stage:

This is one of the best ways to spot the beginning of a dog heat cycle. The swelling is a significant difference over her normal appearance. Her teats may also swell slightly, but this is not a great heat indicator and can be tricky to spot.

If you see your female begin to lick herself, you're probably right in assuming she has gone into heat.  You can wipe her vulva with a tissue and if you see a red bloody discharge, you will be right in assuming she's in heat.  The day you notice this jot down the day on a calendar or other journal.

While attractive to males, she will not allow them to mount or tie. She may become flirtatious and some inexperienced males may try to mount her.  She will not stand for this.  She'll either show her displeasure by barking or nipping at them, move away or sit or lie down.  The males, on the other hand are very attracted to her, though experienced males may not show their interest until later in the cycle.

Females in this phase will urinate more frequently and often show signs of marking with their urine.

Eggs develop in follicles on the ovaries and produce estrogen.  It is the secretion of Estrogen that cause the outward changes that you can see.  Late in this stage, the mature ovarian follicles ovulate and the eggs are released into the uterine tubes to undergo maturation.

2. Second Stage of the Dog Breeding Cycle: Estrous or Standing Heat (or Oestrous if You're from the UK)

The second week is in the dog breeding cycle is called Estrus or luteal phase, where the bloody discharge turns a lighter straw color and the vulva swells.  It is during this week that she will allow the male to mate with her.  A sure outward sign that she is ready is when she holds her tail to one side.

Ovulation normally occurs towards the end of this week.  It is important to note that the 63 day gestation period occurs from the day of ovulation, not of mating.  Dogs can mate prior to or after ovulation. 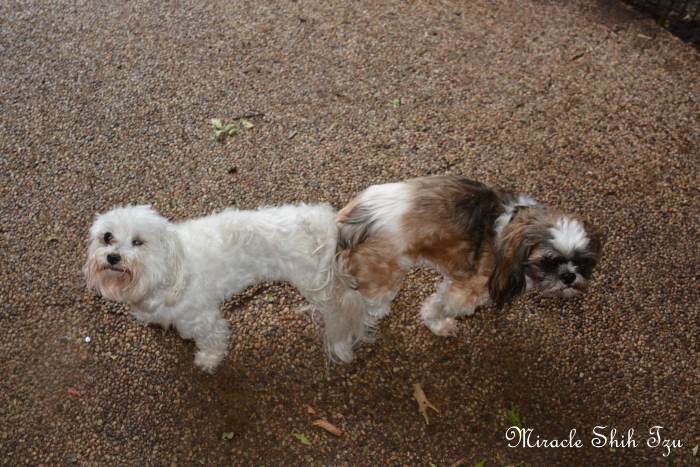 Once the female is ready, she will stand and move her tail to one side (flagging). Once penetration has occurred, the bulbus glandis of the male's penis swells with blood and locks inside the female.  Once in this position, it is called a tie or you might also hear the word, "knot"

Once tied, the male and female will remain together for a period of time sometimes up to 45 minutes.  It is important as a breeder to protect the couple during this time from other dogs in the household.  Many dogs become anxious and try to pull away.  If this happens, it's important to sit with the dogs and reassure that all is OK.

After ovulation occurs, it takes about 2 to 3 days for the eggs to ripen.  The mature eggs remain viable for 2 to 3 days.  Fertilization occurs in the uterine tubes then then the fertilized eggs find their way to the uterus.  Once in the uterus  the fertilized eggs will float for up to three weeks until they finally implant themselves into the uterine wall.

From day 21 onward, the implanted embryos undergo a transformation where all body organs and limbs begin to form.  This is a critical period in the pregnancy where anything might have an affect on the growing embryos.  Stress, medication, infections or vaccinations can cause serious abnormalities in the puppies.

These problems can cause growing fetuses to die and be reabsorbed, birth defects, or defects that cause mental or physical handicaps.  Often when there is a problem in a litter that causes problems or even fatalities, we blame it on genetics.  That may not be the case as the environment in the womb may be to blame. 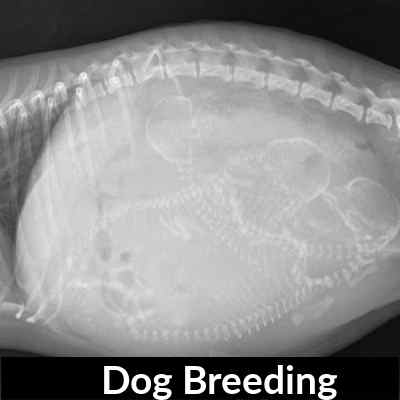 The Diestrus Stage of the Dog Heat Cycle usually begins around day 24. This stage can last from 60-90 days.  The heat cycle is over and she is either pregnant or not.  Her body is going through the same hormonal changes during diestrus whether or not she has become pregnant.

Your dog is no longer fertile at this point.  Estrogen levels are low, while progesterone peaks 3 to 4 weeks after the start of diestrus and then declines to normal levels by the end of diestrus.

This is the fourth and final stage of the dog heat cycle when your dog is normal. This is considered a resting stage.

Anestrus is the time between diestrus and the next proestrus.  This stage will last for about 2 months though certain breeds can be much longer.  The vulva has gone back to the normal size and there is no discharge.  This is the time during which the body repairs itself and the uterus prepares for the next pregnancy.

Nursing or lactation is part of the anestrus stage

If Your Dog Mated, What's Next?

If your dog mated with another dog, there is a good chance, she is pregnant, but there are no 100% guarantees.  The next article in this series of breeding dogs, deals with pregnancy stages, detection and ways you can nurture and help your girl (aka bitch).

Read about the Dog Pregnancy Stages

References and Further Reading About the Dog Breeding Cycle