Giardia in Shih Tzu dogs is one of my most annoying parasites.  Want to know why?

When I found out that a couple of my puppies were diagnosed with Giardia, I immediately went into the research mode.  At the time, my adult dogs showed no symptoms, but I did have a new puppy here that was having a problem with diarrhea.  Was she the cause of all of stress? Or was her diarrhea simply a matter of dietary indiscretion?

I needed to take care of the problem immediately because you never want to mess with anything that could be contagious to others.

The good news is that I did take care of the problem, but it took some time.  First I needed to understand what I was dealing with, and this is what I learned…

What is Giardia in Shih Tzu Dogs?

This small protozoan called Giardia is not a worm, but a one-celled organism proficient at causing harm in many animal species including people.   It is not entirely clear how frequent transmission occurs between Shih Tzu and their owners.

It is a very common parasite found in Shih Tzu dogs as well as all other breeds.  Giardia infections are also common in cats, horses, pigs, cows, sheep, and goats. The resultant disease is called giardiasis.

Giardia in Shih Tzu Dogs and the Transmission to People

There seem to be different groupings of these Giardia organisms called Assemblages that affect different species of animals.   The good news for dog owners is that even though it is possible to get Giardia from your Shih Tzu, it is not likely.

When humans acquire this type of infection, it is usually as a result of coming in contact with contamination from human waste.  Infection occurs when giardia enters the public water supply.  Outbreaks have been known to happen even in day care centers where there is a breakdown in good hygiene practices. But it can also occur when a person drinks from a contaminated water source such as a stream.

You’ve no doubt heard of traveler’s diarrhea.  You may also be familiar with the terms beaver fever or backpacker disease.  These are all caused by the Giardia organism. People assume the stream is clean and drink from it.  Shortly thereafter, they become sick.

How do Dogs Get Giardia?

In the Shih Tzu, the most common form of transmission is through the fecal—oral route.  This is where your dog comes into contact with a contaminated surface, usually infected feces, water or something else that contain Giardia cysts.

The infection is easy to contract because Giardia cysts are very resilient.  When another animal excretes them in their feces, the are most contagious but they can live for awhile under the right conditions.

So, I think you are getting the idea. The dog eats something containing the cysts, or they may sniff something and later lick their lips.  Drinking puddles of contaminated water is another way our Shih Tzu dogs become infected.

Cysts survive longer in areas with high humidity.  When there are dogs or other animals living close by, infection is inevitable.

Feel free to skip the next section that is purely technical and well, boring. 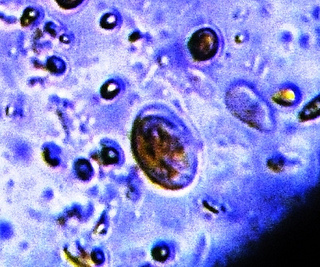 This protozoan appears to have a two-stage life cycle.

The cyst passes through the dog’s small intestine.

The trophozoites then attach themselves to the intestinal wall where they ingest the cells that line the intestines. 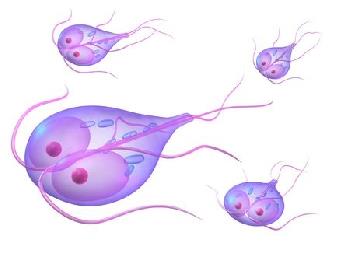 The trophozoite is mobile and lives in the small intestine of its host.

This phase of the Giardia’s life cycle creates havoc in the dog’s digestion system and leads to diarrhea.

This trophozoite stage will reproduce by dividing and then will form hard cysts around them.

The dog poops and cysts are shed making them available to infect another dog or other animal.

The cycle begins again when another dog swallows the cyst.

The hardy cyst phase can exist in the environment for up to several months, especially in damp locations.

As a side note, I have only had one severe case of Giardia in my lifetime, and it was not from all my dogs.

(It happened in Thailand when I went to pick up my new adopted son.) I was extremely ill, and I cringe to think my dogs might have felt as sick as I did.

If your dog has foul smelling diarrhea, which can range from soft to watery with traces of mucus and blood, he might have Giardia.  These symptoms, however, could be present if the dog has other parasites.

Vomiting is often present and sometimes the dog has a fever.  If symptoms persist, the dog may also lose weight.  Often infected Shih Tzu dogs show no symptoms.   Luckily, this is not a life-threatening disorder unless the dog has other underlying problems that might cause him to be immuno-compromised.

To determine if Giardia is your problem, you will need to provide a stool sample to your veterinarian.  Laboratory tests are the only way to make a definitive diagnosis.  Giardia infections are often misdiagnosed or under-diagnosed because it 's hard to see.

At the vet clinic, there are several tests that are used to diagnosis the problem:

Dogs do not shed cysts continually, so it is possible to get several negative fecal results, even though the dog has the disease.  Sometimes you can view a trophozoite, the most active form of Giardia moving around on a microscope slide.   If the vet tech is using a fecal flotation method, they look for actual cysts.  Unfortunately, both positive and negative results can be confusing.

To make it even more confusing, many Shih Tzu shed the cysts without having any symptoms.  Some dogs have symptoms, but no cysts are found.  Remember that dogs do not shed cysts every day.   Some veterinarians will repeat a test that has negative results when the dog shows the classic symptoms.

If a vet tells you that the dog has the worse case they’ve ever seen, it is likely that the dog just happens to be shedding cysts on the day of the test.

Veterinarians do not always agree on the correct treatment for giardiasis.  Some vets will treat even with a negative test result if the dog is showing other signs of the disease.

There are several drugs available to treat the infection.  All of them must be given, over the course of several days.

Metronidazole, an antibiotic is given twice a day for ten consecutive days.  The trade name for metronidazole is Flagyl®, and it is about 60-70% useful for the treatment of giardia.   Often vets will prescribe this medicine for other GI tract infections, too.  Some of the side effects of this drug can include vomiting, anorexia, and liver toxicity.  Pregnant dogs should not take Metronidazole.

Fenbendazole, or Panacur® is an antiparasitic that is also effective against other types of worms.  To rid the dog of giardia, you must administer for five to six consecutive days. This medicine also goes by the name Safeguard® and is considered 96% effective when used for six days in a row.

Sometimes, a vet may suggest that you use a combination of both drugs to treat.

Since cysts cling to hair, part of the treatment involves bathing the dog.

All dogs and cats in the household should be treated at the same time, even though they may not be infected at the time.

A regular dog shampoo is usually sufficient to remove all fecal debris.

Some veterinarians recommend an antibiotic shampoo such as Chlor 4 which contains Chlorhexidine Gluconate 4%. This shampoo is also suitable for treating other skin irritations.

Antibiotic wipes are also useful to clean the dog after he eliminates.

Giardia in the Shih Tzu and Environmental Concerns

It 's hard to decontaminate the soil or grass, but removing any standing water outside is important.  Puppies especially love to taste anything novel, and a puddle of water might be appealing to a thirsty pup.

Remove any fecal matter immediately.  Discourage dogs from sniffing and eating their poop.  Cysts will not survive in dry conditions, but the prompt removal of any feces just makes sense.

Inside your house, all surfaces that the dogs come in contact with should be cleaned.  You can either use a steam cleaning method or a disinfectant cleaner.

Floors, beds, and crates can be disinfected with chlorine bleach at a rate of 1-2 cups per gallon of water.

Other chemicals such as Quaternary ammonium work well to kill the cysts.  The product Lysol® is a familiar example of this type of cleaner. Plain household ammonia will also kill giardia.

Clean, disinfect, and allow to air dry before allowing your dog to have access to the area. The longer the disinfectant stays on the surface, the better the chances that all cysts will be killed.  Ten minutes is usually a good ballpark figure to aim for, especially if you are spraying with a bleach solution.

Wash non-cloth toys and dog bowls in the dishwasher.  Bedding and cloth toys should be washed in hot water and dried with hot air in the dryer.  If feces has contaminated the carpet, use a standard carpet shampoo after you have removed all the fecal material.

To be on the safe, you should assume that the Giardia in Shih Tzu dogs could be dangerous to you.  Most sources, however, suggest that there is a small risk of you becoming infected.

People who have diseases that might increase their susceptibility to infection should limit their exposure to a Shih Tzu being treated for Giardia.  People in this category that are those that are immunodeficient such AIDS or cancer patients undergoing chemotherapy.  If you do develop GI symptoms, it would be advisable to seek medical attention. Good hand washing is always the best way to prevent the spread of germs.  You should wash your hands

If you have children, encourage them to get into the habit of washing their hands regularly especially after playing with their dog.

Use gloves if you are concerned.

References use When Researching Giardia in Shih Tzu Dogs

Centers for Disease Control and Prevention