Cushings Disease in Shih Tzu Dogs
Is Your Dog at Risk? 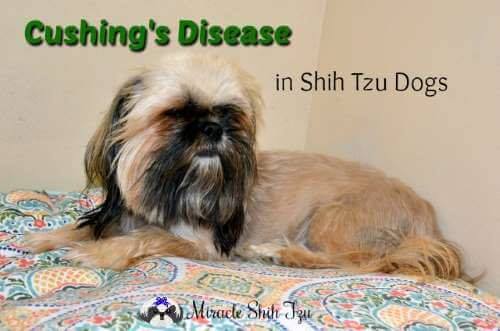 Cushing's Disease in Shih Tzu dogs is a rather complex condition that was named after the doctor (Dr. Harvey Cushing) who first diagnosed the syndrome in 1932.  It is more common for the smaller breed dogs and can occur in Shih Tzu dogs, although not the most common genetic problem.

A Word of Warning:

This is not my most entertain article, but I have been made aware by a number of puppy buyers that the disease is still very much alive and taking the lives of cherished members of our breed, so boring or not, I hope that it will provide some understanding of the complex nature of this condition.

Table of Contents for Cushing's Disease in Shih Tzu Dogs

Molly was the beloved baby of one of my past puppy buyers.  I learned about her four weeks after her death because her heartbroken owners were ready to move on with a new puppy.  Molly developed symptoms when she was 12 years old and eventually passed on at the age of 13.  She was diagnosed with Cushing's Disease, but her owners didn't know the actual cause of death as she passed in the middle of the night while everyone in the household was asleep.

As we will discover in this article, dogs that are diagnosed especially as a senior dog may very well succumb to another illness and most owners are so brokenhearted that the actual cause of death is irrelevant at that point.

Unless you are knowledgeable about anatomy, a quick explanation is necessary.

Adrenal Glands:  Both dogs and humans (and most mammals) have two little organs located in front of the kidneys.  They are responsible for producing the stress hormones, they balance our electrolyte levels, oversee the production of the sex hormones and manage the body’s fight or flight reaction.  They are very busy little organs.

Pituitary Gland:  This is a tiny bean shaped organ at the base of the brain.  One of the functions of this organ is to produce adrenocorticotropic hormone (ACTH) which signals the adrenal glands to produce cortisol

Cortisol:  This is the fight or flight hormone in the body.  It is necessary for life and helps maintain the body.

When the adrenals are working properly and producing just the right amount of cortisol, your dog can respond to stress, control weight, fight off infections, and maintain just the right level of blood sugar.

Too much or too little cortisol can cause problems.  When something occurs to throw off this balance, and the body starts producing too much of the chemical, that is when Cushing’s Disease begins.

On the opposite side of the spectrum, if too little cortisol is produced, the result is Addison’s Disease.

In the case of Cushing’s, the body becomes un-regulated, and the adrenal glands begin producing too much hormone.   When the cortisol is released, it triggers the release of glucose from the liver.

Glucose provides the body a ready source of energy and prepares the body for the fight or flight response to occur.   The adrenal glands also impact blood pressure, electrolyte balance, bone and fat metabolism and the immune function.  Too much of a good thing is not okay.  When produced continually, the result is problems such as:

If often takes up to a year for symptoms to develop, it is not one of those diseases that are easy to detect in the early stages.  If your dog is experiencing some of these symptoms, make an appointment with your vet to have him/her evaluated.

When everything is in the balance, the dog is healthy. Cushing's syndrome happens when your dog’s body makes too much of a hormone called cortisol.

Even ear drops that contain steroids may cause a dog to be at risk.  Today, vets are more aware of the dangers and use non-steroidal medications to relieve symptoms.  But, it still occurs.  This form is called iatrogenic Cushing’s Syndrome.

The diagnosis of Cushing’s is challenging for vets.  Symptoms usually tend to appear in older dogs.  At this age, dogs will have other medical issues that will need to be weeded out.  The diagnosing of Cushing’s disease is based on laboratory tests, x-rays, ultrasound

If a dog is showing some of the signs, a vet will start with blood work and possible urinalysis.  The urinalysis may reveal a urinary or bladder infection.  Blood work will show an increase in white blood cells suggesting an infection, higher levels of cholesterol, blood sugar, and serum alkaline phosphate which is a liver enzyme.  An X-ray will often show an enlarged liver.  Ultrasound may reveal tumors on the adrenals.

Additional tests may include one or more these four tests:  The Urine Cortisol/Creatinine Ratio urine cortisol/creatinine ratio, low dose, and high dose dexamethasone suppression test, and an ACTH stimulation test.

Pituitary Dependent Hyperadrenocorticism (PDH) accounts for about 85% of all canine and feline patients.  Of this type, there is a pituitary tumor, usually minuscule, that causes the overstimulation of the adrenal glands.

Adrenal tumor (AT).  The tumor could be either be benign or malignant.  About 15% of patients have this form of Cushing’s Disease.

If the tests reveal an adrenal dependent Cushing’s as a result of a tumor, the treatment would be to remove the Adrenal gland.

If it turns out that Cushing’s is the product of too many steroids given over an extended period of time for other health problems, your vet may be able to wean him off of the steroids and provide a different type of medication for his symptoms.

If the pituitary is to blame, no surgery is required, but medicine is prescribed.  Typical medications used include

Each has some side effects and problems.

Lysodren is the least expensive and is convenient to use.  It works by killing the outer layer of the adrenal glands (The Adrenals are composed of three layers).  The outermost layer is responsible for making the corticosteroids. Periodic blood tests are required to prevent Addison’s Disease (the disease exactly opposite to Cushing’s Disease).  The dog must have a good appetite for this drug to work properly.

Ketoconazole is more expense and requires daily doses to be effective.  Contrary to Lysodren, it does not cause Addison’s disease, but it is possible that your dog will not be able to absorb it, making it useless.

Anipryl® (L-Deprenyl) was originally used to restore the balance of brain chemicals and used for Parkinson’s disease.  It was approved in 1997 to treat Cushing’s disease in dogs.  The clinical trials revealed about 70 percent improvement rate with a reduction in cortisol levels and improvement in symptoms.

L-Deprenyl does not cause Addison's disease and has few side effects. However, it is slower to show improvements, and it is expensive.

Trilostane (Vetoryl®) works by inhibiting an enzyme involved in cortisol production.  Close monitoring with blood tests is necessary because of the possibility of Addison’s Disease.  Decreased appetite and tiredness are typical side effects, especially initially.

With so much talk about natural remedies, it might be easy to get on the bandwagon and try them on your own.  Before doing that, always check with your veterinarian for recommendations.

According to HolisticPetInfo. com, there are products aimed at reducing the adrenal glands' output of cortisol.  Other herbs can help with detoxification.  They recommend dandelion as a tonic for liver, kidneys and adrenal glands and help to normalize adrenal gland functioning.

Burdock is an herb that detoxifies and removes unwanted substances from the body.

Hepar Sulph works on the skin.

Two other herbs recommended by naturalnews.com include Astragalus and Mercurius.

Mercurius is good for thirst and irritability.

Some people swear by CBD Oil, but as of this writing, I have found no creditible research that it helps or cures Cushings Disease.

A good resource for managing this disease in a natural way is Dogs, Diet, & Disease: An Owner's Guide to Diabetes Mellitus, Pancreatitis, Cushing's Disease, & More by Caroline Levin.

If the cause of Cushing’s is due to the Pituitary gland, there is no cure.  It can be treated with medication so the quality of your dog’s life can be maintained and his lifespan prolonged. In most cases, dogs treated with the right medication will go on to live a normal long life.  Treatment should begin as soon as you notice something is not normal.

If the cause turns out to be a tumor of the adrenal glands, surgery may take care of the problem.  If, however, cancer has spread to other organs, surgery is not an option.

According to Dr. Jeff Grognet, a veterinarian with a practice in British Columbia, “The average survival time for a dog with CD is about two years, with only 10 percent of patients living beyond the four-year mark.”  Since most of the dogs that have Cushing’s are seniors, they may end up passing on for some unrelated problem. 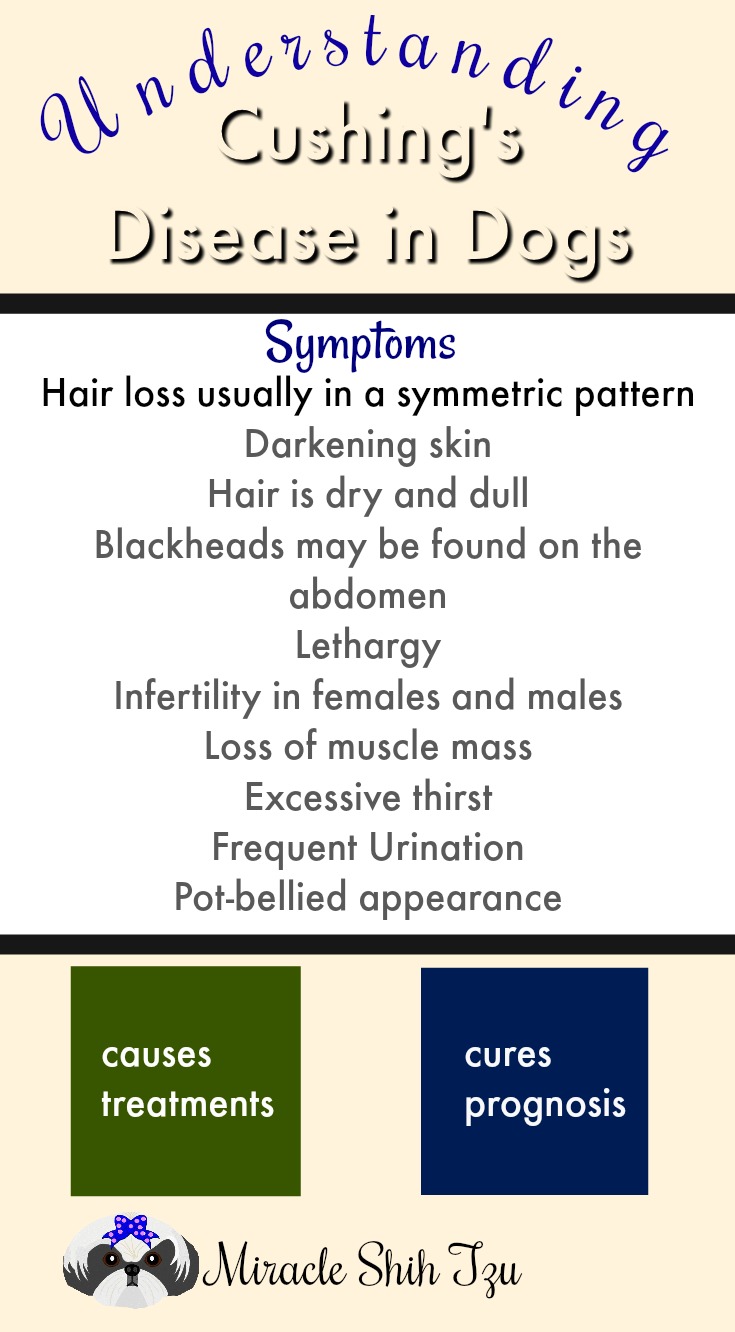 Did You Find this Article About Cushings Disease Helpful?