The History of Dog Food

Contrary to what many people believe, even though the dog is a cousin to a modern wolf, both of these species have different ancestors. The one that was first domesticated was an ancestor of the dog, and it is now extinct. Since then, the dog has been bred all over the world — there are Asian dog breeds, European, African, American.

They were bred selectively and mixed for different traits, behaviors, attributes, for example, to create the most obedient dog breeds, the perfect guardians or hunters, and naturally, human companions such as our beloved Shih Tzu dogs.

The History of Dog Food

Dogs were first domesticated for a specific, work-related purpose — to help with household duties or guard the properties — but it had evolved with time when more and more families decided to keep a dog solely as a companion.

Now, in the 21st century,  it is easier to be a good dog parent. You can read so much about pets and their diet on this website and find almost any tidbit of information about dogs at your fingertips .

You can speak with a dog food advisor and choose from a variety of products: grain-free dog food, low-calorie dog food for small breeds, freeze-dried, dried, canned, raw foods, optimal blends for large breeds, and so on. It's hard to imagine what it was like before this information explosion.  So, how did people manage in the past? When was commercial dog food created and what did dogs eat before?

History of Dog Food:  Before We Had Commercial Pet Foods

In 2013, a team of scientists compared the genomes of the cell's mitochondria of 126 modern dogs and wolves and 18 fossils.  They concluded  that dogs were domesticated somewhere in Europe or western Siberia, between 18,800 and 32,100 years ago.  This means that dogs have lived side by side with humans for a very long time.

Before the Industrial Revolution, dogs ate  much the same food as their owners.  People were either cooking for them just like for the members of the family or feeding them with the scraps and leftovers. Pet owners of less fortunate economic background couldn't afford to experiment too much.  By the 1800s, there were dog owners who had been able to observe what could promote canine health and what was harmful.  This time also coincides with the period when many of the modern dog breeds came into existence.

History of Dog Food:  Commercial Foods on the Rise

The very first commercially prepared dog food was actually a biscuit. These hard biscuit snacks were meant for humans, especially for sailors, because they contained a lot of nutrients and had a longer shelf life than was typical of fresh foods.  It wasn't long before someone thought that these treats could also  benefit dogs — the very first advertisement of biscuits for dogs dates back to the 1790s.

James Spratt is the man very often credited with creating dog biscuits. He was an electrician who had visited London to sell lightning rods.  While there, he observed a group of dogs sitting near the docks waiting for sailors to throw out stale biscuits, called hard tack.  This gave Spratt an idea and this became the start of a successful business venture.  He would make little cakes or biscuits that dogs would eat.

He was the first to patent his recipe (beef blood, biscuits made from grains, beetroot, and vegetables).  Later, in 1861, his famous recipe also included meat fibrine, which was the dried unsalted gelatinous parts of bison, or prairie beef.  He was American, but he first set up a dog food company in England, and since it was a huge success.  He moved his business to the USA, which was the start to what we know today as the pet food industry in general. He marketed to wealthy dog owners and became successful. 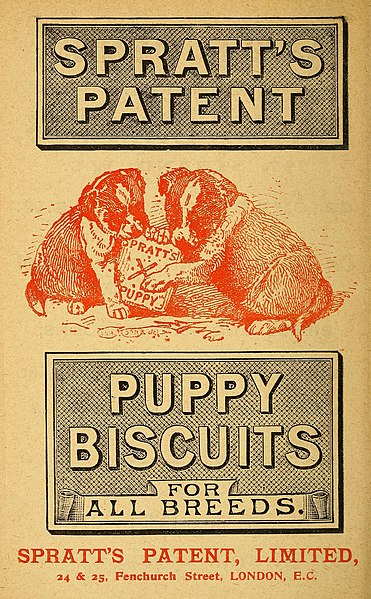 The pet food industry, like many other industries, had its first boom during the Industrial Revolution. Technology sprung up that was very much-needed for commercialization.  Large commercial slaughterhouses and the canning technology for preservation became common during this time.   By the end of the 1800s, and early 1900s a new type of professional arose, and that was the profession of a veterinary doctor, though, other types of experts gave advice on animal health before the veterinarian.

The History of Dog Food and the 20th Century Wars

Then, World War 1 came, and while it might seem as though the dog food industry would take a back seat to the war effort, the opposite is actually what happened. Spratt's company provided dog biscuits to the dogs working in the army.  It was at this time that Spratt's experts began to develop a food similar to what we now know as dog kibble.

After the end of the war, companies interested in entering the commercial pet food industry began making canned foods in the 1922.  These first canned dog foods were made from horse meat and marked as lean, red meat so as not to alarm the general public.  Ken-l-Ration was the first canned food in the United States.  Initially, much of the horse meat used in dog food came from the slaughter of war horses that were no longer needed after the war efforts and also due to the introduction of the automobile.  Later, horses were being bred and slaughtered for dog food.

World War 2 brought completely different changes.  The shortage of metals, especially tin, and the rationing of meat meant the end of canned food. That's where more pet food companies started developing dry dog food, or dry kibble — to avoid cans and to provide dogs with nutrition without sacrificing too much meat. By the second half of the 1950s, food companies had mastered kibbling (or extrusion), which is still the most popular way of pet food production today.

The History of Dog Food After World War I and II

In the 1960s, the pet food market really started growing, and this is when many of today's pet food brands have their roots, such as the Ralston Purina Company.  This company began experimenting with different ways to create dry foods that had a longer shelf life.  They used these newer machines first to create their Chex breakfast cereal and then dog food.

Spratt's U.S. business was purchased by General Mills and the era of finding more palatable food for dogs that also was nutritious began. At the same time, people began to be more and more aware of canine's nutritional needs, and the first official science studies on their health were conducted. Pet parents finally learned that they shouldn't feed their dogs only "human food" and that canines can vary significantly among each other.

In 1964, another major change occurred.  The Pet Food Institute , a lobby group of the pet food industry, launched a series of ad campaigns aimed at convincing the general public that commercially prepared pet food was the only thing they should feed their dogs. Their campaigns were highly successful and many people stopped feeding dogs any human food.

The Hill's Pet Nutrition Company introduced a brand of prescription kibbles for various health problems in 1980 and continued well into the 1990s to add to this line of foods.

The History of Dog Food in the 21st Century

The general public's interest in dog ownership grew at an astonishing rate after the turn of the century.  According to the 2019-2020 American Pet Products Association (APPA) National Pet Owners Survey, 67% of U.S. households own a pet and 63 million households in the U.S. own a dog.  The APPA estimates that $99 billion dollars will be spent in 2020 on dog related goods and services.

It's not unusual to go into a Pet Store and see more than four or five isles of shelves filled with dog food.  People no longer must choose between table scraps or commercial food or between canned and kibble foods.  There is every conceivable type of food available which makes choosing a dog food in 2021 a little more difficult than in the early part of the 20th century.

Just as people have moved from highly processed foods of the 1970s and 1980s, the dog's diet is changing too.  No longer must we buy dog kibble or canned dog foods that are highly processed, we can move back in time when people ate real meat and vegetables.  Now, pet owners have the option of serving fresh dog food and in many cases, fresh foods made from human grade ingredients. 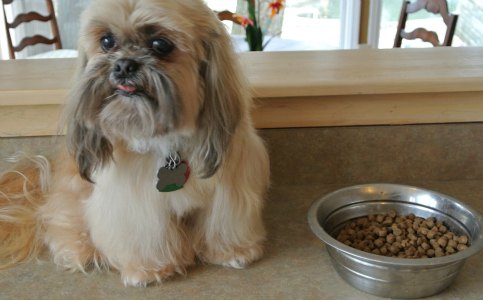 History of Dog Food: What Food is Best?

There's no universal answer to this question. Because there are so many different breeds, there are at least as many sets of nutritional needs — Shih Tzu health problems may require different diets than beagle health problems, etc. — not to mention the specific requirements of age, size,  or lifestyle. The healthiest dog food for small dogs won't be at all beneficial to large breeds, and puppies will need something completely different than senior dogs.

Nowadays, pet food needs to meet almost as many requirements as human food. Organizations, such as Association of American Feed Control Officials (AAFCO) , make sure that products available on the pet food market are safe for our beloved furry friends.

Of course, it is still possible to find foods that won't provide your dog with everything they need; if you don't have enough information or help while shopping, it is very likely that you will find something of low quality. That's why it's essential to learn about pets' nutritional needs in general and those specific requirements of our cats and dogs. You need to know what to look for and what to avoid to be able to provide complete and well-balanced nutrition. This is the least we can do in exchange for dogs' unconditional love and loyalty.

Even though dogs have been domesticated for centuries, dog food wasn't around for such a long time. But the times have changed, and caring about what your pet eats became an important part of life.

That's why the pet food industry has grown so much over the years. What's more, the demand for pet food is still growing as well as the supply; thus, choosing the right food for your pet can sometimes cause a headache.

Therefore, if you want to avoid it, you should do in-depth research on your pet's nutritional needs and food requirements. If you find that out, picking the right pet food will be a piece of cake.

The History of Dog Food:  Pin for Future Reference 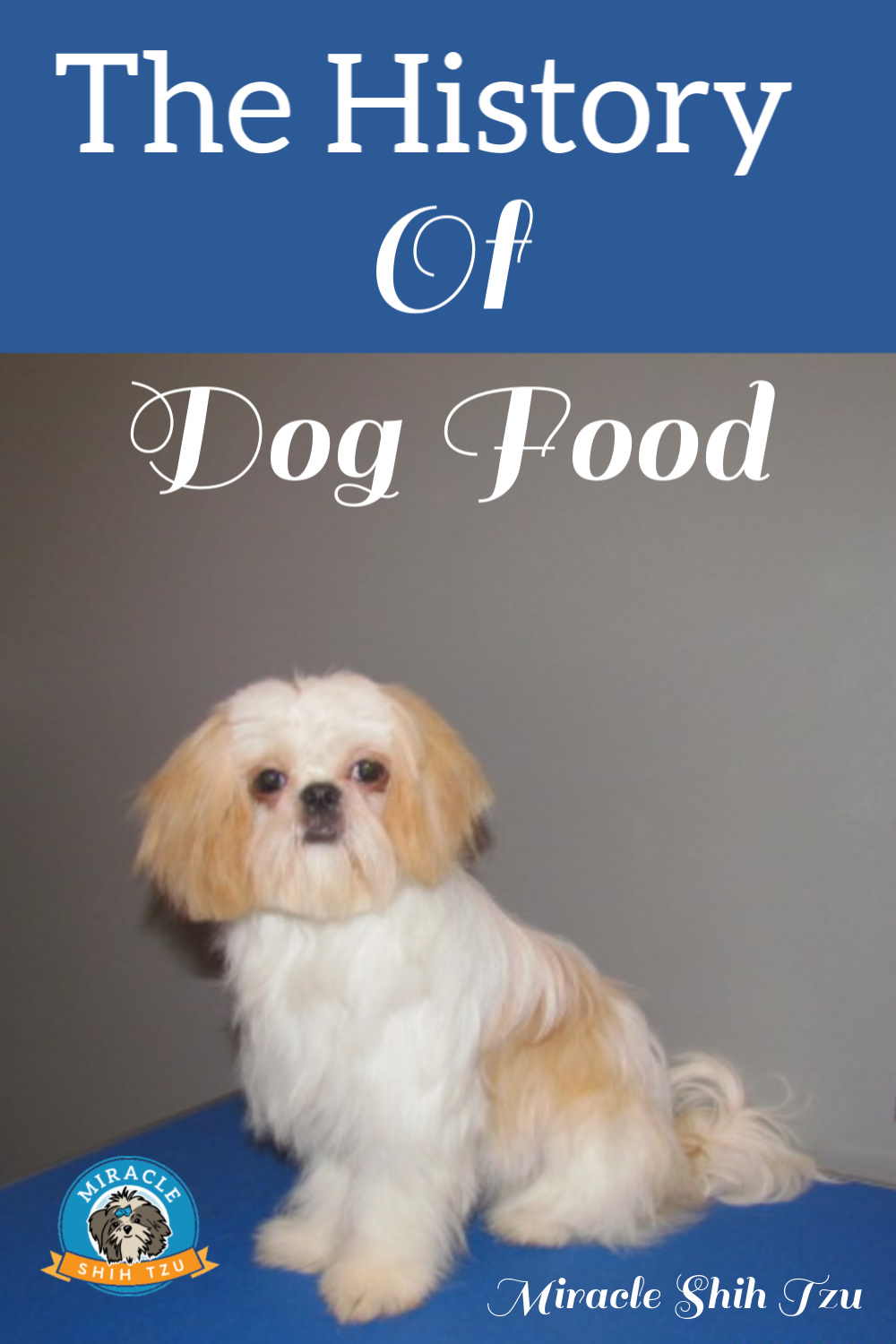 The history of dog food Pin

Barbara Knightsbridge is a Content writer, linguist, bookworm and animal lover. The proud owner (or the subject) of a Miniature Poodle and a British Shorthair. Co-writer at Pet Food Reviews.

Did You Find the History of Dog Food Interesting? Then...